Please be patient.
These large images are worth downloading...

Email your recent pictures to

The program and pictures in the link above are from the famous 1973 benefit concert
featuring our Hastings Jazz Ensemble
and a number of jazz greats including
on drums: Gene Krupa, trombone: Moe Synder, vibes: Joe Venuto, Vocals: Sandi Venuto

Peter Zimmerman has a new book.

These are pictures from the West coast.

Who has pictures from the East coast party?

The Internet is truly amazing...

"One of the business people in my small town of Bisbee alerted me to your site and I was surprised to see myself featured. I'm flattered to think so many people remember me so many years ago. It is humerous to hear the perceptions classmates had of me. I have become used to being out of step with most of the people around me, a product of moving so much and having to constantly re-establish relationships.
What a great thing for so many of you to have remained in touch and friends after so many years.
Hello Jan and Nancy, I do remember you both as friends.
I would love to be able to come to Hastings for the reunion but with a restaurant it's so hard to break away. My husband and I work the restaurant and it is all encompassing. We we're the small restaurant featured in last months Gourmet, The Bisbee Breakfast Club, we do have a web site with the same name.
Isn't it interesting how lives are intertwined and continue to pop up through out life. It would be so fun to hear all your stories.
Take care all,
Heather Schmeltz Grimm"

Artists Barbara Harnack and Michael Lancaster
stand inside the home they built almost entirely by themselves.

See a short movie about Barbara and her husband Michael's art.
http://www.studio98b.com/movie.html

See their article in American Style 8/07

Barbara's Harnack Lancaster's home and gallery, designed and built by her and her husband with their own hands..

Left to right: Amrit Lancaster (Barbara Harnack's daughter), Barbara Harnack and a friend, Harmony, near their home in Costa Rica. (They are building an eco development there - see www.rainforestpreserve.com.) Above Dyamonte (diamond) Falls, the tallest single fall in Costa Rica. It drops nearly 1,000'. Says Barbara, "The cave behind has people living in it who took us on an 'eco tour.'"

Barbara has had a piece selected for the 2007 Clay National Bienial at The Louisville Museum of Arts & Crafts (Feb -April). There were 74 accepted pieces out of over 570.

Barbara has also had a piece selected for the 2007 4th World Ceramic Bienialle, Icheon, Korea.
There were thousands of entries and only 124 in sculptural ceramics and 70 in functional were accepted.
10 pieces were selected from the United States.
The exhibit will be in March and April and is attended by over six million people.

Empire State Games with participants from all over NY State.

Pictures from the Youth Council Fundraiser - 6/2/07

All time winner of the "I traveled the longest distance to be here" award.
Dragan Andrijevic
from the Republic of Macedonia
to Maud's
6/9/06

Peter Hazou was part of a round table discussion in
January 2007's edition of Euromoney (www.euromoney.com)
Click here to read the article. (Requires Adobe Acrobat)

Peter Hazou was unable to attend the 25th, but has been participating through this website. An antique car collector, he sent these pictures of his latest aquisition:

Peter wrote: "The Tatra is a T87, which first belonged to the Foreign Ministry in Czechoslovakia for use by spiffy apparachecs before passing on to a factory manager outside of Prague; the factory apparently producing 'teddy bears' for export."

Newlyweds Kim and Mike, then Mary Jane, Kim and Ray, and Alyssa her date (Dan) before the prom. (2007)

12/01: Ray Paletta usually plays Santa for all his friends' children. This one got wise and said to his father afterwards, "I know that was Ray, but that's OK."

Photo taken by Channel 5 News of Ray fighting a fire in Patterson, NY.

If your memory of our classmate, Doug Nolan, is "fuzzy," this picture shouldn't change anything. It is kind of fuzzy too.

This is the cover art to his CD. Click here for a sample.

"My husband and I moved to Northbrook, Il seventeen years ago to be near Neil our son and his family. Northbrook is just about the same distance from Chicago as Hastings is from Manhattan. We are north of Chicago and have made a great adjustment considering we left such a lovely area as Westchester and moved to the flat lands of Illinois. But we have two granddaughters who were seven and three when we moved here and are now young adults. One is in law school here in Chicago and the younger one is finishing her second year at Tufts.
We still miss Hastings and New York and sometimes we get to make a visit there."

Well wishers can send her birthday greetings at arthurweiner@sbcglobal.net.

Mrs. Weiner in 1965
Click on the picture to see her Grade 2 class,
(with Keith Olbermann in the back row)
along with a few other classics of Mrs. Appl and Miss. Sponder
found by Greg Vaughn.

"Some photos of me, Lily and Jim (I work for a pharmaceutical
company, Jim is a Molecular Biologist at Princeton and Lily is 5 1/2. We never seem to be in any photos together (and
there is nothing in these to confirm we even live in the same house). But if I
was making this up, I'd look younger, my husband would look buffer, and my
daughter...well, she's perfect!"
Susan Kraft 3/31/06

No more rumors... Meet Mr & Mrs (Ravinsky) Martin!
Glenn said they had an Alaskan style ceremony up in the mountains along a creek and emailed,
"Our wedding attire, furnished by "THE GAP"

Again, per Glenn's email:
"...Nancy's girls, Ashley, Jenny and Keri, and my kids, Jillian and Derek.
Our Brady bunch!"

Although a number of people wrote or called saying they meant to be there, we still had a sixteen.
Amazing what a quick email to the group can do on short notice.

New (as of 11/23/05) candid shots of many of us
from our Austrailian Correspondent, Steve Jones
and
our our Waynesboro, VA Correspondent, Glenn Martin!

Pictures from Ann Kapfer Fahey
(these are big, so scroll to the right)

How many people you can YOU name?

Donnie and Nancy Waterous Whitehead (cleverly hidden from view) on vacation with their daughters in Hawaii (Oct. '00) 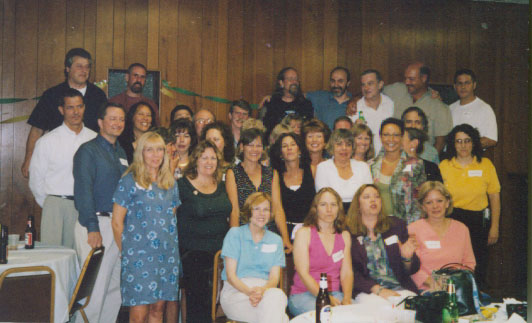 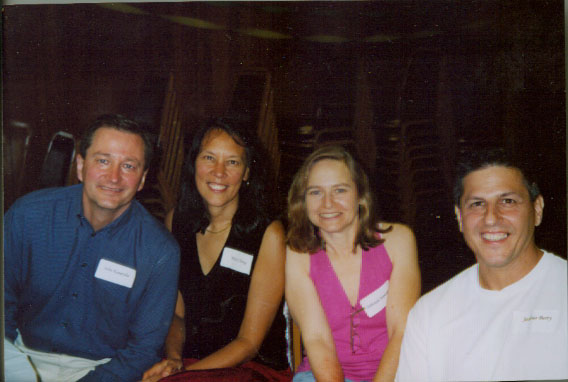 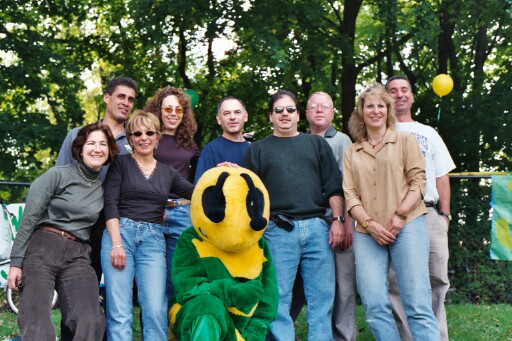 The pictures didn't come out that well, but here are three.

Mystery Guest Gathering at Maud's
All it takes is a classmate saying he or she is coming to town, and look what happens...
Keep showing up, and we'll keep partying.
Here are pictures of our mini-reunion, Friday, 3/14/03 at Maud's.

Memorial Day Weekend Picnic
at Reynolds Field "North"
(the Klubock's massive front yard, which we didn't even use)
Here are pictures of our mini-reunion, 5/26/02 4-9 PM

Nicole "Niki" Michaelides Cirrincione
and her twins right after a football game .

Amy Farber sent these pictures of Michael and Paul (11/00)

"Here's a rare photo opportunity. I look like part of a vignette from Touched Like An Angel. The baby is my godchild, "the peanut". See you in July!"

David Walters calls this
"a terrible picture of me producing electricity for PG&E."

A picture of Julie, Jere and the kids
"It's not the greatest picture of us, but we were all at Epcot on our Honeymoon and decided to do our picture at the Kodak exhibit. At least y'all can see my new husband!! Take care"
Julie Spencer

Robert, Yasmine (Tetenbaum), and Lenny Curtis.
(Godiva is the chocolate Lab, and twins Isabelle and Maia were born within weeks of this picture, dated 10/16/99!) 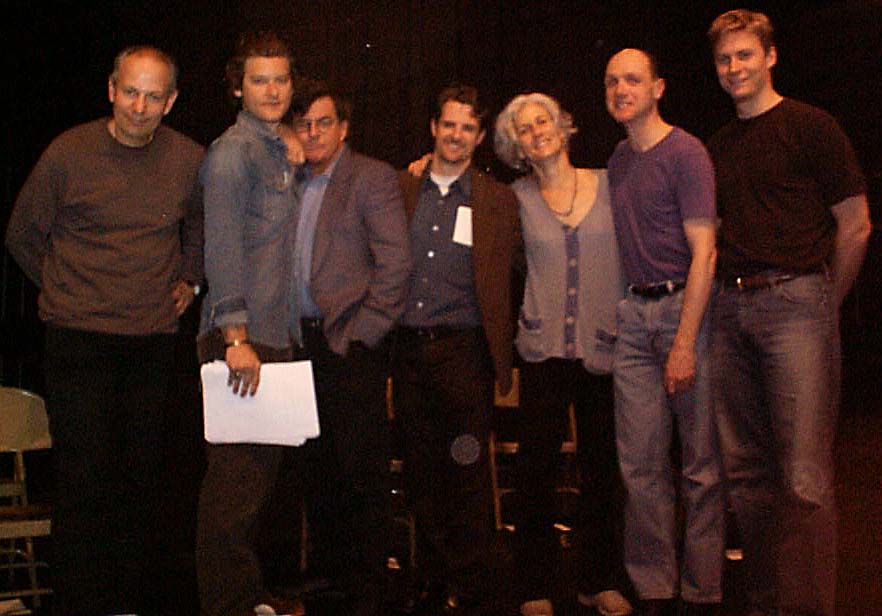 April 2003
(David is second from the right.
Click photo to enlarge.)

A business trip to San Diego for Steve, and a quick vacation for Alan. Behind the scenes tour of the Wild Animal Park, 10/16/99.

At a reunion picnic at Susan Stein Klubock's, wearing a vintage Varsity Jacket

It was such a short time ago, we congratulated Chuck Fleming for winning his second term as a Dobbs Ferry trustee (3/18/03) and for being inducted into the Hastings High School Athletic Hall of Fame (10/4/03), and now we mourn his passing. He had a sudden heart attack while jogging at Ardsley's track, 6/17/04, while his son C.J. was at his prom, and with graduation and Father’s Day right around the corner.

Please send them to